Update 4/3/20: See below for a video that includes organizers, mentors and participants discussing the Ideas Lab process and how it helped the community generate research proposals.

Our love affair with the ocean runs deep. Humans love to live next to the sea, honeymoon on islands and dream about summer road trips to the beach while tapping away at our keyboards. During lobster and crab seasons in the Northeast U.S., we enjoy the food, community and culture of the Northeast U.S. Likewise, we celebrate shrimp and red snapper seasons on the Gulf Coast and halibut and salmon seasons in the Pacific Northwest.

But, what if those seasons change or don’t come at all?

In the last five years, scientists have begun to see what they predicted in the 1980’s when global warming was first widely recognized: a shift in the habitats of marine species due to warming oceans.

“The oceans are warming due to climate change, causing fish to move to different areas,” said Charlotte Hudson, project director of the Lenfest Ocean Program. Hudson explained that fisheries managers are charged with overseeing the catches for commercially important species. “Large-scale relocation of species will require coordination among fisheries managers and regional management groups and likely will affect the policies they put in place.” 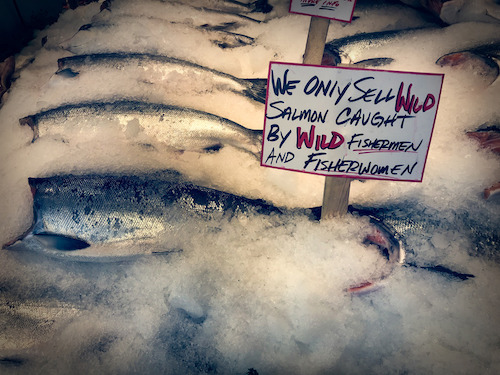 Salmon for sale at Pike Place Market in Seattle, Wash.

The Lenfest Ocean Program supports research that addresses the needs of coastal stakeholders, with priority given to those projects that include the people who will be implementing solutions. To that end, Lenfest co-hosted the 2019 Ocean Fisheries Ideas Lab last month. “We thought it would be important to bring together all of the individuals who are experiencing this issue to talk about some ways forward,” Hudson said.

Research that results from this workshop could help solve some of the problems faced by stakeholders at the meeting, said Jeff Kaelin, Director of Sustainability and Government Relations for Lund’s Fisheries, a commercial fishing company based in Cape May, New Jersey. “We have information from our boats that we’re providing to the federal government — habitat information, temperatures and so forth — that they could use to monitor changing ocean conditions,” Kaelin said. According to Kaelin, a database system that combines that data with catch data also collected from commercial fishing companies could help scientists predict the movement of species in response to changing seas.

Kaelin also challenged the assumption that shifting species was all bad news. In the Northeast, he said, “southern species move north offering additional fishing opportunities and habitat ranges may increase for others,” he explained.

Having stakeholders like Kaelin bring their unique perspectives to the Ideas Lab was critical to its success. In fact, the diversity of the ideas generated was directly proportional to the diversity of people in the room, said Roger Mann, Ph.D., a workshop participant and professor at the Virginia Institute of Marine Science. “Rather than trying to take a group of fishery biologists who all think along the same lines and ask them how to fix a problem, you had people in groups who had a modest amount of overlap in expertise take on this broad intellectual exercise. It worked quite well.”

Funded teams will soon have the job of turning their ideas into real solutions. Proposal selection is underway. Stay tuned!

Update 4/2/20: In the meantime, Lenfest hosted a virtual panel discussion with Ideas Labs mentors and participants that was viewed by 133 people. March 30, 2020. The panel discussion, which was held 30 March 2020, focused on the Ideas Lab process and how it worked to produce creative, innovative research proposals aimed at solving the problem of shifting species. Watch the video, hear more about how teams formed at the lab and get a sense of what an Ideas Lab is all about.